The press has called our printer a “Magic Wand for printing”.

Printing capability at the fingertips of smartphone users around the world

The PrintBrush XDR is a wireless full-color inkjet printer that weighs about the same as an average smartphone but can print larger imprints than its own size.

This new versatile device will change the way we think about printing because, for the first time, it is now possible to print anything in full color anywhere, on almost any surface.

Ordinary printer technology is significantly limited for mobile usage by the fact that printout size is directly linked to device width. RMPT overcomes this limitation by allowing larger printout sizes with smaller hardware.

Another advantage is the ability to print directly onto a wide variety of surfaces of varying thicknesses. Mobile users can therefore pick up any paper or material available and use it as print media. This advantage opens up applications far beyond mobile printing.

We have been working with RMPT since the year 2000 and are the pioneers of this game-changing technology.   Right from the early years of development, we could prove that letter-size printing is possible with RMPT:

PrintBrush XDR is one of the first devices featuring RMPT technology. RMPT is the only viable technology path to build truly portable printing devices.

Using advanced software instead of hardware, RMPT opens the way for miniaturization, mechanical simplicity and a lack of electrical motors, thus making it an excellent choice for the environment: 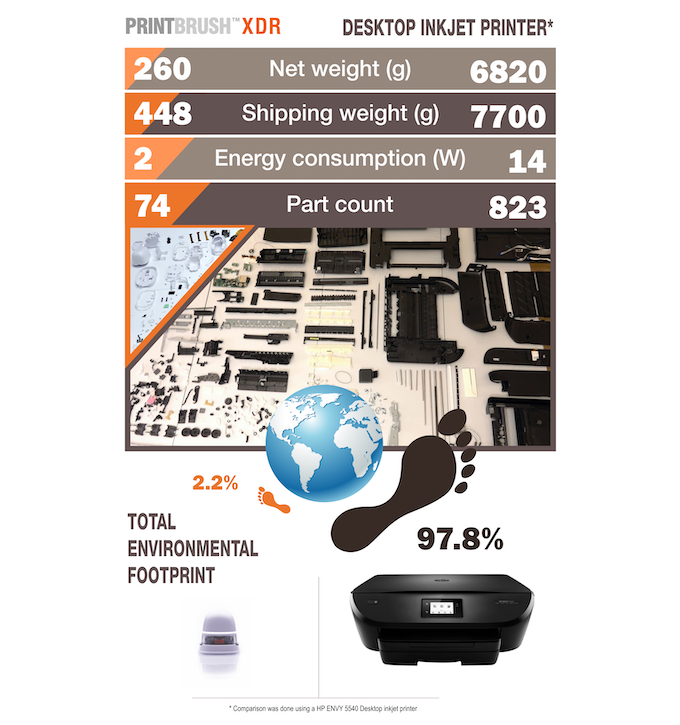 Thanks to the miniature size of the printer, we have created very compact and light packaging. Compared to the packaging of one ordinary desktop printer, we would be able to squeeze in more than 55 packaged units of our printer. 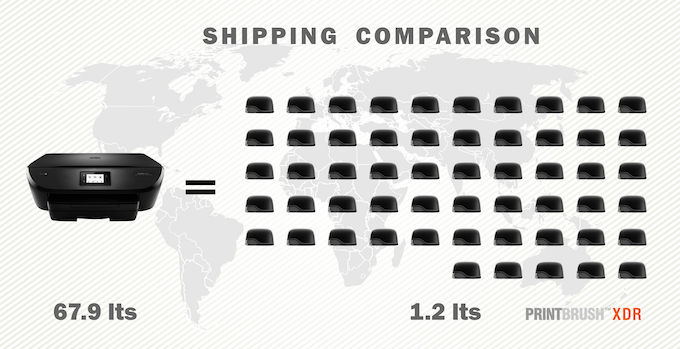 When you consider that over 100 million desktop printers are manufactured every year, our technology has the potential to save hundreds of thousands of tons of steel and plastic, to say nothing of saving huge amounts of energy during manufacturing and usage. Users also have the potential of saving a few trees since they can go paperless and start printing on re-usable substrates such as whiteboards!

As the user slides the PrintBrush XDR across a surface, an optical sensor tracks the velocity and direction of the printer relative to the surface. A controller matches the software interrupts to the relevant columns of the imprint image.

Thanks to built-in sensors and intelligent software, the imprint will always be correct independently of the direction or the speed of a user’s hand movement. You can go as slow or as fast as you want. You can even stop in the middle of the printout: the PrintBrush XDR delivers accurate and reliable results. 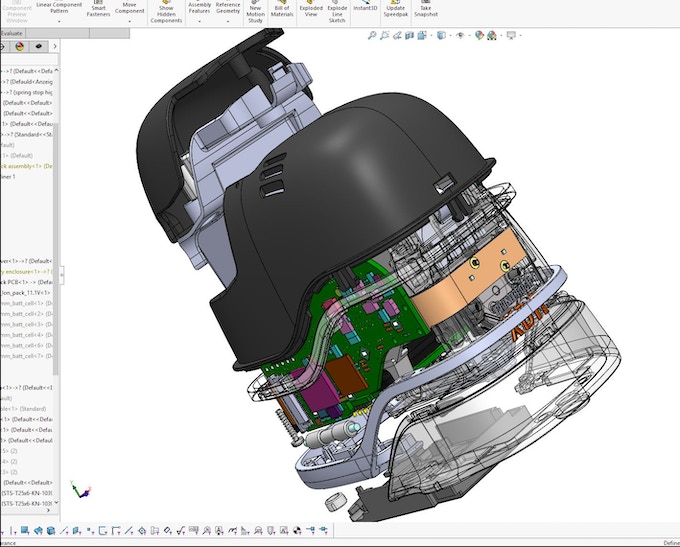 The selection of the content to be printed is done through a control App in a smartphone, tablet or a laptop. When selection is ready, just push a print button (choosing single or multiple imprints) on the control App and then move the printer from left to right or right to left over the substrate to be printed.

The device can work as a stand-alone, untethered device if images have been previously uploaded to it. The device is WiFi enabled (No WiFi router needed) and has a USB interface as backup for data connectivity.

Much attention has been vested into the industrial design of the PrintBrush XDR. Following the Swedish tradition of a minimalist and simplistic design, we eliminated -from the very beginning- the idea of having any superfluous elements.

The idea was to create a design that fits perfectly into the palm of your hand. The industrial design defined the size of all the internal components. It was a huge challenge, but we are proud to have achieved our goal.

The device is being manufactured in two colors: Black and white, but we will be offering many customization options thanks to a replaceable cover.

We have carried out an exhaustive test schedule, printing millions of imprints with our pilot units to make sure that they provide the highest possible reliability and quality.

We have even built special machines to carry out automated testing: